Excerpt from Under the Apple-Trees (1916)

I find there is enough of the troglodyte in most persons to make them love the rocks and the caves and ledges that the air and the rains have carved out of them.

The rocks are not so close akin to us as the soil; they are one more remove from us; but they lie back of all, and are the final source of all. I do not suppose they attract us on this account, but on quite other grounds. Rocks do not recommend the land to the tiller of the soil, but they recommend it to those who reap a harvest of another sort — the artist, the poet, the walker, the student and lover of all primitive open-air things.

Time, geologic time, looks out at us from the rocks as from no other objects in the landscape. Geologic time! How the striking of the great clock, whose hours are millions of years, reverberates out of the abyss of the past! Mountains fall, and the foundations of the earth shift, as it beats out the moments of terrestrial history. Rocks have literally come down to us from a foreworld. The youth of the earth is in the soil and in the trees and verdure that springs from it; its age is in the rocks; in the great stone book of the geologic strata its history is written. Even if we do not know our geology, there is something in the face of a cliff and in the look of a granite boulder that gives us pause and draws us thitherward in our walk. …One might have a worse fate than to have his lot cast in a rockless country — a treeless country would be still worse: but how the emigrant from New England or New York to the prairie States or to the cotton States, must miss his paternal rocks and ledges! A prairie farm has no past, no history looks out of it, no battle of the elemental forces has been fought there, and only a very tame, bloodless battle of the human forces. 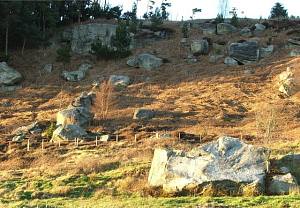 A landscape without rocks lacks something. Without the outcropping ledge, the faces of the hills lack eyebrows; without a drift boulder here and there, the fields lack the rugged elemental touch. Next to the trees, rocks are points of interest in the landscape. Slumbering here and there upon the turf, they enhance the sense of repose. How expressionless and uninteresting the landscape in one of the prairie States, or in one of the Southern States, contrasted with a New England or a New York farm! The grazing or ruminating cattle add a picturesque feature, but the gray granite boulders have been lying there chewing their stony cuds vastly longer. How meditative and contented they look, dreaming the centuries away!

The rocks have a history; gray and weather-worn, they are veterans of many battles; they have most of them marched in the ranks of vast stone brigades during the ice age; they have been torn from the hills, recruited from the mountain-tops, and marshaled on the plains and in the valleys; and now the elemental war is over, there they lie waging a gentle but incessant warfare with time, and slowly, oh, so slowly, yielding to its attacks! I say they lie there, but some of them are still in motion, creeping down the slopes, or out from the clay-banks, nudged and urged along by the frosts and the rains, and the sun. It is hard even for the rocks to keep still in this world of motion, but it takes the hour-hand of many years to mark their progress. What in my childhood we called “the old pennyroyal rock,” because pennyroyal always grew beside it, has, in my time, crept out of the bank by the roadside three or four feet. When a rock, loosened from its ties in the hills, once becomes a wanderer, it is restless ever after, and stirs in its sleep. Heat and cold expand and contract it, and make it creep down an incline. Hitch your rock to a sunbeam, and come back in a hundred years, and see how much it has moved. I know a great platform of rock weighing hundreds of tons, and large enough to build a house upon, that has slid down the hill from the ledges above, and that is pushing a roll of turf before it as a boat pushes a wave, but stand there till you are gray, and you will see no motion; return in a century, and you will doubtless find that the great rock raft has progressed a few inches. What a sense of leisure such things give us hurrying mortals!