HIS AMERICANISM REACHED IN TO THE MARROW OF HIS BONES 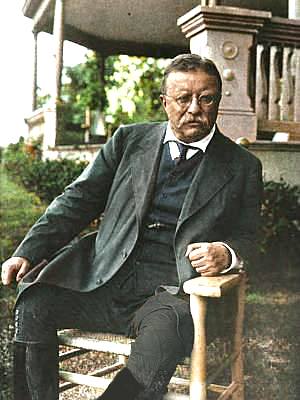 Theodore Roosevelt at his home in Oyster Bay (source)

[p.5] NEVER before in my life has it been so hard for me to accept the death of any man as it has been for me to accept the death of Theodore Roosevelt. I think I must have unconsciously felt that his power to live was unconquerable. Such unbounded energy and vitality impressed one like the perennial forces of nature. I cannot associate the thought of death with him. He always seemed to have an unlimited reserve of health and power. Apparently he cared no more for the bullet which that would-be assassin shot into his breast a few years ago than for a fleabite.

From his ranch days in Montana to the past year or two I saw and was with him many times in many places. In the Yellowstone Park in the spring of 1903, in his retreat in the woods of Virginia during the last term of his presidency, at Oyster Bay at various times, in Washington at the White House, and at my place on the Hudson, I have felt the arousing and stimulating impact of his wonderful personality. When he came into the room it was as if a strong wind had blown the door open. You felt his radiant energy before he got halfway up the stairs.

When we went birding together it was ostensibly as teacher and pupil, but it often turned out that the teacher got as many lessons as he gave.

Early in May, during the last term of his presidency, he asked me to go with him to his retreat in the woods of Virginia, called “Pine Knot,” and help him name his birds. Together we identified more than seventy-five species of birds and wild fowl. He knew them all but two, and I knew them all but two. He taught me Bewick's wren and one of the rarer warblers, and I taught him the swamp sparrow and the pine warbler. A few days before he had seen Lincoln's sparrow in an old weedy field. On Sunday after church, he took me there and we loitered around for an hour, but the sparrow did not appear. Had he found this bird again, he would have been one ahead of me. The one subject I do know, and ought to know, is the birds. It has been one of the main studies of a long life. He knew the subject as well as I did, while he knew with the same thoroughness scores of other subjects of which I am entirely ignorant.

He was a naturalist on the broadest grounds, uniting much technical knowledge with knowledge of the daily lives and habits of all forms of wild life. He probably knew tenfold more natural history than all the presidents who had preceded him, and, I think one is safe in saying, more human history also.

In the Yellowstone Park when I was with him, he carried no gun, but one [p.6] day as we were riding along, he saw a live mouse on the ground beside the road. He instantly jumped out of the sleigh and caught the mouse in his hands; and that afternoon he skinned it and prepared it in the approved taxidermist's way, and sent it to the United States National Museum in Washington. It proved to be a species new to the Park.

In looking over the many letters I have had from him, first and last, I find that the greater number of them are taken up with the discussion of natural history problems, such as Darwin's theory of natural selection, “sports,” protective coloration. He would not allow himself, nor would he permit others to dogmatize about nature. He knew how infinitely various are her moods and ways, and not infrequently did he take me to task for being too sweeping in my statements.

When, in the early part of the last decade, while he was President, there was a serious outbreak of nature-faking in books and in various weekly and monthly periodicals, Roosevelt joined me and others in a crusade against the fakers and wielded the “big stick” with deadly effect. He detected a sham naturalist as quickly as he did a trading politician.

Roosevelt was much amused by the change that had come over the spirit of that terrible beast, the grizzly bear in Yellowstone Park. In a letter to me he comments as follows:

I think that nothing is more amusing and interesting than the development of the changes made in wild beast character by the wholly unprecedented course of things in the Yellowstone Park. I have just had a letter from Buffalo Jones, describing his experiences in trying to get tin cans off the feet of the bears in the Yellowstone Park. There are lots of tin cans in the garbage heaps which the bears muss over, and it has now become fairly common for a bear to get his paw so caught in a tin can that he cannot get it off and of course great pain and injury follow. Buffalo Jones was sent with another scout to capture, tie up and cure these bears. He roped two and got the can off of one, but the other tore himself loose, can and all, and escaped. …

Think of the grizzly bear of the early Rocky Mountain hunters and explorers, and then think of the fact that part of the recognized duties of the scouts in the Yellowstone Park at this moment is to catch this same grizzly bear and remove tin cans from the bear's paws in the bear's interest!

The grounds of the White House are lovely now, and the most decorative birds in them are some red-headed woodpeckers.

Give my regards to Mrs. Burroughs. How I wish I could see you at Slabsides! But of course this summer there is no chance of that.

Roosevelt was a many-sided man and every side was like an electric battery. Such versatility, such vitality, such thoroughness, such copiousness, have rarely been united in one man. He was not only a full man, he was also a ready man and an exact man. He could bring all his vast resources of power and knowledge to bear upon a given subject instantly.

Courageous, confident, self-assertive, he was yet singularly tender and sympathetic. He was an autocratic democrat. “Hail fellow well met” with teamsters, mechanics, and cowboys, he could meet kings and emperors on their own ground. A lover of big-game hunting, he was a naturalist before he was a sportsman.

His Americanism reached in to the marrow of his bones. I could never get him interested in that other great American,—one more strictly of the people than he was—Walt Whitman. Whitman's democracy was too rank and unrelieved to attract him. The Rooseveltian strenuousness and austerity and high social ideals stood in the way.

[p.7] Roosevelt combined and harmonized opposite qualities. Never have I known such good-fellowship joined to such austerity, such moral courage to such physical courage, such prodigious powers of memory united with such powers of original thought. He could face a charging lion, or a grizzly bear, as coolly as he could an angry politician.

There was always something imminent about him, like an avalanche that the sound of your voice might loosen. The word demanded by the occasion was instantly on his lips, whether it were to give pleasure or pain. In his presence one felt that the day of judgment might come at any moment. No easy tolerance with him, but you could always count on the just word, the square deal, and tolerance of your opinion if it were well founded.

The charge that he was an impulsive man has no foundation; it was a wrong interpretation of his power of quick decision. His singleness of purpose and the vitality and alertness of each of his many sides enabled him to decide quickly where others hesitate and stumble. The emphasis and the sharpness of his yea and nay, were those of a man who always knew his own mind and knew it instantly. What seemed rashness in him was only the action of a mind of extraordinary quickness and precision. His uncompromising character made him many enemies, but without it he would not have been the Roosevelt who stamped himself so deeply upon the hearts and the history of his countrymen.

When I think of his death amid these great days when such tremendous world events are fast becoming history, and recall what a part he could have played in them, and would gladly have played, had his health permitted, I realize with new poignancy what a loss the world has suffered in his passing! A pall seems to settle upon the very sky. The world is bleaker and colder for his absence from it. We shall not look upon his like again. 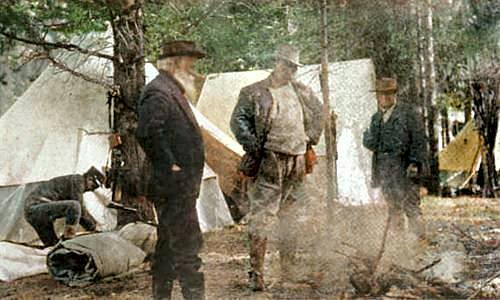 The warm human fellowship about the camp fire, where our thoughts turned to great adventures, and our tongues uttered intimate words of home and friends and the great adventure which is life

1 This article, in part, was read before the Roosevelt Memorial Meeting at the Century Club, New York City, February 9, by Major George Haven Putnam.


Photo of Roosevelt outside his home preceded this article and was the Frontispiece to this issue which contained several In Memoriam articles contributed by various naturalists who knew him. Text and images from magazine Natural History (Jan 1919), 19, No. 1, 5-7, as reprinted in book form Natural History: The Journal of the American Museum: Volume 19 (1919), 5-7. Frontispiece on p.4. (source)