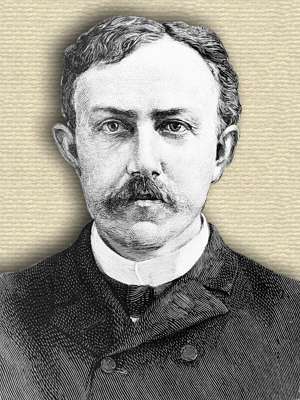 [p.15] ROOSEVELT entered Harvard College in 1876 at the age of eighteen, hoping to become a naturalist, having already made a considerable collection of birds, besides many observations as to their habits. His eyesight being defective, however, and not connecting well with magnifying glasses, his early ambition was discouraged by his teachers to whom the chief range of study lay within the field of the microscope. They overlooked the fact that besides primordial slime and determinant chromosomes, there were also in the world grizzly bears, tigers, elephants and trout, as well as song birds and rattlesnakes,—all of which yield profound interest and are alike worthy of study.

So, being discouraged as to work along his chosen line, and in his love of outdoor science, the young naturalist turned to political philosophy, his secondary interests lying in history and politics. He then closed up his private cabinet, giving his stuffed bird skins (through Professor Baird of the Smithsonian) to me. These I transferred to the University of Indiana where they are now in a befitting glass case in Owen Hall, each skin nicely prepared and correctly labeled in the crude boyish handwriting which the distinguished collector never outgrew.

Long after all this, I once took occasion to remind Mr. Roosevelt that “they spoiled a good naturalist” in making him a statesman. But the naturalist was never submerged in the exigencies of statesmanship. During an automobile drive in 1912 across the Santa Clara Valley, Roosevelt displayed a keen interest in the sparrows and warblers of the thickets along the road. These he could call by their first names and mostly by their second. Once in the Yosemite with John Muir, he noted elements in bird and squirrel life which had escaped even his keen-eyed and sympathetic companion.

In our exploration of Hawaii in 1901, my colleague, Dr. Barton W. Evermann, and I came across a very beautiful fish, the Kalikali, golden yellow with broad crossbands of deep crimson. This then bore the name of Serranus brighami given it by its discoverer, Alvin Seale. But the species was no Serranus; and it was moreover plainly the type of a new genus. This we called Rooseveltia, in honor of “Theodore Roosevelt, Naturalist” and in recognition of his services in the promotion of zoological research. With this compliment he was “delighted.” “Who would not be?” he said.

In the various natural history explorations undertaken by me—and by others during his administration as President of the United States—we could always count on intelligent and effective sympathy. In so far as scientific appointments rested with him he gave them careful and conscientious consideration. Indeed, during his administration, governmental science reached its high-water mark. In 1905 I was preparing for an exploration of the deep seas around Japan by means of the Fish Commission steamer “Albatross.” While I was talking this matter over with Roosevelt he said, pounding the table with his fist: “It was to help along things like this, Dr. Jordan, that I took this job!”

The story of Roosevelt’s relation to Tutuila in Samoa has never been told, and though scientific only in part, it may be related here.1

The three islands of Samoa were held for a period of years under the joint protectorate of Great Britain, Germany, and the United States. The general result was unsatisfactory, a condition due mainly to the petty intrigues of German agents. In Stevenson’s words, “There was a fresh conspiracy every day,” and a good account of this [p.16] situation was given by “R. L. S.” in A Footnote to History.

England at last exchanged her rights here for certain advantages elsewhere, and the islands themselves were divided, Upolu, the center of population, and Savaii, the largest of the group, going to Germany, while Tutuila, with its magnificent harbor at Pago Pago, and little Manua went to the United States. The native Tutuilans took the matter seriously and were much pleased with the new arrangement. The two chieftains, Mauga and Paa Vei, then caused to be drawn up an elaborate document formally deeding the sovereignly of their island to the United States. Now, in the etiquette of the South Seas, to receive a present without acknowledgment is a flagrant insult, but the people saw the United States occupy the island and erect docks, storehouses, and residences without a word of thanks.

When I went to Samoa in 1902, I found the inhabitants of Tutuila much worked up over the matter. Tuamanua, chief of the tiny outlying island, was in a state which, on a larger scale, would be called rebellion. I went before the little congress at Pago Pago and explained to the people that the United States did not wish to take away any of their rights. It had paid the owners for the land occupied as well as for all service required. It had, moreover, through the governor, Captain (later Rear Admiral) Uriel Sebree, taken great pains to safeguard the interests of the people in their relations to traders in copra, the dried meat of the coconut which is the principal export of that region. I also called attention to the fact that in the interest of the people the President had sent Professor Vernon Kellogg (of Stanford University) and me to study the fisheries of the islands to find out all the kinds and what they were good for. I had myself furnished them with a series of paintings of poisonous fishes, some species

having in their tissues a substance analogous to strychnine, which would produce the dangerous and often fatal disease known as ciguatera. In addition, Professor Kellogg had rendered a material service in teaching them how to get rid of the mosquito and thus to abate their two most dreaded scourges, “dengue” and “elephantiasis,” both diseases being produced by minute animal organisms carried from person to person by the mosquito.

I also called to their minds the sad fact that just about the time their deed of gift was received at Washington, the President of the United States had been assassinated by an insane ruffian. It was probable that in the confusion which followed, the document had been misplaced and the incoming President, always thoughtful about such matters, had possibly never seen it. I would bring the affair to his attention, sure that he would make a courteous response. This kept the people quiet for the time, and expectant as to the future.

I then sent a statement of facts to the President, and soon after left the island: but I read in the press in the fall of 1902 that President Roosevelt had sent a gold watch each to Mauga and Paa Vei, also a flag to the little native police corps or Fitafiltas, and that in Pago Pago they had had a “red-letter day of rejoicing.”

On returning to Washington I found that the deed of gift had been filed under the head of “Docks,’’ Pago Pago, from the official point of view, being merely the water front of a naval station. Fear of precedent had prevented acknowledgment.

McKinley’s advisers emphasized this point but Roosevelt characteristically did not care a straw for precedent. He did what a natural man should do. he made it right with the people. He said afterward to me in regard to it, “It always pays for a nation to be a gentleman.”

1 This incident is republished by courtesy of The New Republic.—The Editor.