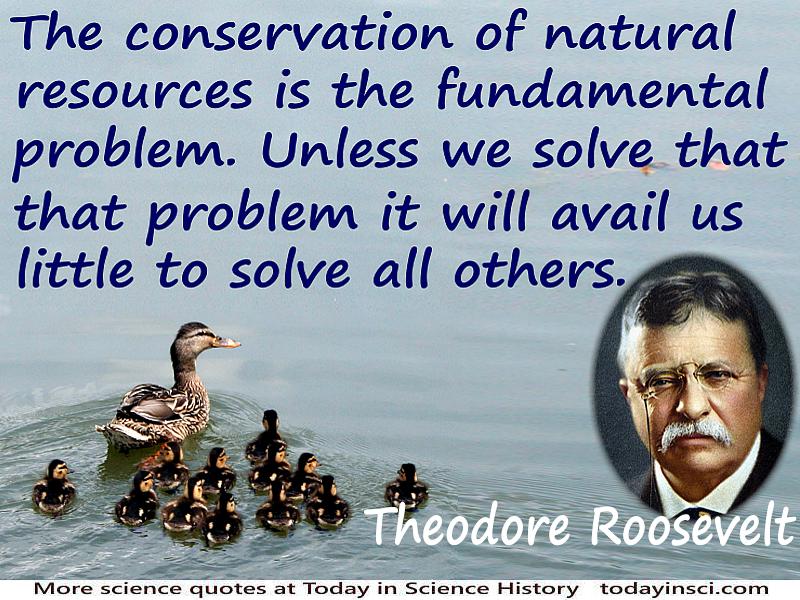 “The conservation of natural resources is the fundamental problem. Unless we solve that problem it will avail us little to solve all others.”
— U.S. President Theodore Roosevelt
Address to the Deep Waterway Convention, Memphis (4 Oct 1907).

Detail from political cartoon by Clifford Berryman, 'Life on the Mississippi' (2 Oct 1907). (source)

On 4 Oct 1907, Republican President Theodore Roosevelt addressed the Deep Water Convention being held at Memphis, Tennessee.1 It was one of his stops on a memorable three-week journey through a large part of the middle West and South that he began from Washington, D.C. on 29 Sep 1909. His purpose was to address the need for adequate improvement to the inland waterways from Chicago to the Gulf of Mexico.2

At Canton Ohio, on 30 Sep 1907, Roosevelt dedicated the McKinley National Memorial and honored the assassinated President. In his speech, Roosevelt also spoke at length against the kind of businessmen who made unscrupulous use of their wealth. To discourage dishonest businessment, it was to be the policy of the administration that wrongdoers would be vigorously prosecuted:3

“... it is a veritable calamity to achieve temporary triumph by violation or evasion of the law, and … we set our faces like flint against those offenders who do wrong in order to acquire great wealth, or who use this wealth as a help in wrongdoing.”

When he reached Keokuk, he began a trip down the Mississippi River, after a speech that stressed the importance of the improvement of the navigable deep water route between Chicago and the Gulf. He repeated the theme when he spoke in St. Louis, explaining the “whys” for engaging in the project. He also made a short stop at Cairo as he continued down the river to Memphis.

While addressing the audience at the Deep Water Convention, Roosevelt declared, “In wealth of natural resources no kingdom of Europe can compare with the Mississippi Valley and the region around the Great Lakes,” which together with all the developing manufacturing centres brought an exceptional need for the transportation of  “coal, lumber, corn, wheat, cotton, cattle.” The rivers, he said should be made “really fit to serve as arteries of trade.” To meet that cost, Roosevelt alleged:

Roosevelt then pointed out the value of forest to check soil erosion, retard run-off and prevent floods.

“Still the loss from soil wash is enormous. It is computed that one-fifth of a cubic mile in volume, or one billion tons in the weight of the richest soil matter in the United States, is … bourne into the sea. The loss to the farmer is in effect a tax greater than all other land taxes combined, and one yielding absolutely no return.”

He expressed concern that “Many of these resources which we have been in the habit of calling inexhaustible are being rapidly exhausted, or incertain regions have actually disappeared. Coal mines, oil and gas fields, and iron mines in important numbers are already worked out. The coal and oil measures which remain are passing rapidly, or have actually passed, into the possession of great corporations, who acquire ominous power … without supervision of any kind.”

Roosevelt continued,“We are consuming forest three times faster than they are being reproduced. Some of the richest timber lands of this continent have already been destroyed, and not replaced, and other vast areas are on the verge of destruction. Yet forests, unlike mines, can be handled so as to yield the best results of use, without exhaustion, just like grain fields. …”
“Shall we continue the waste and destruction of our natural resources, or shall we conserve them? There is no other question of equal gravity now before the Nation. It is the plain duty of those of us who for the moment are responsible to make inventory of the natural resources which have been handed down to us, to forecast as well as we may the needs of the future, and so to handle the great sources of our prosperity as not to destroy in advance all hope for the prosperity of our descendents.”

“... the conservation of natural resources is the fundamental problem. Unless we solve that problem it will avail us little to solve all others. To solve it, the whole Nation must undertake the task through their organizations and associations, through the men whom they have made specially responsible for the welfare of the several States, and finally through Congress and the Executive. As a preliminary step, the Inland Waterways Commission has asked me to call a conference on the conservation of natural resources, including, of course, the streams, to meet in Washington during the coming winter. I shall accordingly call such conference. It ought to be among the most important gatherings in our history, for none have had a more vital question to consider.”

Before concluding, Roosevelt indicated that “The digging of the Panama Canal is the greatest engineering feat which has yet been attempted on this globe.” The benefit to come was that “When the canal is finished our navy can move from one ocean to the other at will; for, remember that our doors open on both oceans.”

Cartoon is a detail from a political cartoon about the river trip. In full, the foreground showed partially submerged, hazardous tree snags which Roosevelt as riverboat pilot, is having to navigate around. Several are labelled: Standard Oil, Railroad Trust, Harriman Interests, Beef Trust and Toledo Trust. By Clifford Berryman titled 'Life on the Mississippi', from the Washington D.C. Evening Post (2 Oct 1907) newspaper, from a copy held in the National Archives. Context added by Webmaster. (source)