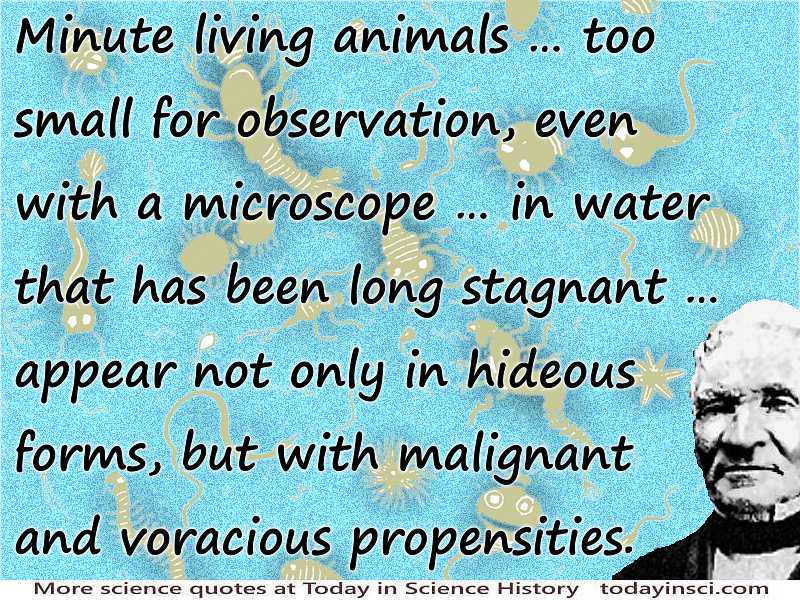 “Minute living animals … too small for observation, even with a microscope … in water that has been long stagnant … appear not only in hideous forms, but with malignant and voracious propensities.”
— Rufus Porter
From Scientific American, (10 Oct 1846). 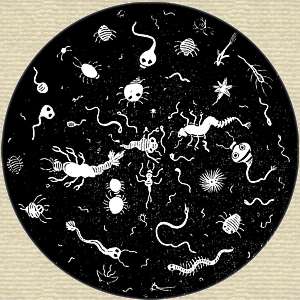 Context of Rufus Porter's quote on Animalculae and water filters

A paragraph in the second volume of Scientific American (10 Oct 1846) is titled 'Animalculae in Water.' Since it has no specific attribution as to the writer, the Webmaster assumes that would be Rufus Porter, the editor of the magazine at the time. As he admits, he was no doubt stimulated to discuss the tiny animal life in drinking water because elsewhere in the issue, he described two new inventions of water filters. No doubt the vendors were happy for the recognition. In truth, the favour was to the reader, because there was awareness that any contamination in water needed to be avoided. In full, he wrote:

“The fact is generally known that nearly all liquids contain a variety of minute living animals, though in some they are too small for observation, even with a microscope. In others, especially in water that has been long stagnant, these animals appear not only in hideous forms, but with malignant and voracious propensities. The print at the head of this article purports to be a microscopic representation of a single drop of such water, with the various animals therein, and some of the inventors and venders of the various improved filters for the Croton water, would have no objection to the prevalence of the opinion that this water contains all the variety of monsters represented in this cut. But the fact is far otherwise; and it is doubtful whether these animals could frequently be detected in the Croton water, with the best solar microscope. Nevertheless, the fact is readily and clearly established that the Croton water contains a quantity of deleterious matter, which is arrested by the filters; and, on this account, we cheerfully and heartily recommend the adoption of filters by all who use this water, from either the public or private hydrants. To this end we would call the special attention of our city readers to the improved filters noticed under the head of ‘New Inventions.’”

Bacteria in water had been known since the 17th century when Antonie van Leeuwenhoek, a talented lens grinder, designed a single lens microscope and made close examinations of tiny life forms.

“Croton water” referred to the public water supply for New York City, coming from the reservoir formed behind a dam built in 1842 on the Croton River. It was already filtered through a municipal water works, so the writer defended its quality, though some “deleterious material” could yet be filtered out.

There were two filters to which Porter alluded. They were under a heading of “NEW INVENTIONS”:

“Lewis's Reversible Faucet Filters - Highly favorable as our opinion may be of the several excellent filters which have been introduced, we cannot avoid giving a preference to the one recently invented by Mr. S. H. Lewis. It consists of a very neat faucet, calculated to be attached to a common Croton or other hydrant, and in connection with the faucet key, is a circular chamber, three inches in diameter, within which is a circular filter consisting of a quantity of cotton cloth, flannel sponge or porous porcelain (which is preferred) compressed between two perforated metallic disks: and the faucet key is so constructed that by turning it to the right, the water is permitted to flow through the filter in one direction; but its course is reversed and it is made to flow in the opposite direction through the filter by turning the key to the left. The filter is thus cleansed at pleasure without any trouble, on examination of the filter or chamber. They may be seen at 28½ Broadway.

West's Cheap and Convenient Filter - For the thousands of families in this city whose houses are not furnished with the Croton water-pipes, a neat portable filter, recently invented by Mr. N. West, of this city, is as near perfection, in convenience and utility, as could be furnished for the low price of one dollar, and should find a place in every house or shop where the Croton water is used. It consists of two conical pails, one within the other; the first is furnished with an efficient filter at the bottom thereof; and the other has a faucet, by which the water is drawn off as occasion requires. They may be found at 156 Delancy street.”

Context by Webmaster, with quotes and Animalculae image from Scientific American (10 Oct 1846), 22 and 19. (source)