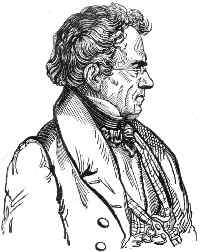 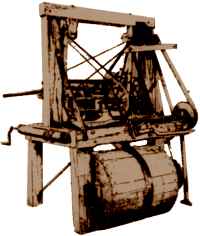 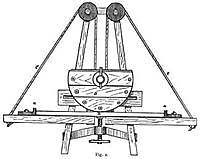 Thomas Blanchard, of Boston, the inventor of Blanchard's lathe for turning irregular forms, was born in Sutton, Worcester county, Massachusetts, June 24, 1788. His brother was engaged in manufacturing Tacks by hand, and young Blanchard, before be was eighteen years of age, attempted to invent a machine for making them, in which, after six years' experiments, he succeeded so effectively that by placing in the hopper the iron to be worked, and applying the motive power, five hundred Tacks were made per minute with better finished heads and points than ever had been made by hand. For this machine be secured a patent, and sold the right of manufacturing to a company for $5,000. His next attempt was to construct a lathe to turn Musket Barrels, with a uniform external finish from end to end, by the combination of one single, self-directing operation.

Notwithstanding about three inches of the barrel at the breech is partly cylindrical and partly with flat sides, both of them were cut by this machine, which ingeniously changed to a vibrating motion as it approached the breech. The superintendent of the Springfield Armory heard of this invention, and he contracted with Mr. Blanchard for one of his machines. When it was in operation, one of the workmen remarked that his own work of grinding the barrels was done away with. Another, employed on the wooden stocks, which were then all made by hand, said that Blanchard could not spoil his job, as he could not make a machine to turn a gun stock. Blanchard answered that he was not sure but he would think about it, and as he was driving home through the town of Brimfield the idea of his lathe for turning irregular forms suddenly struck him. In his emotion he shouted out, “I have got it. I have got it!”

The principle of this machine is that forms are turned by a pattern, the exact shape of the object to be produced, which in every part of it is successively brought in contact with a small friction wheel; this wheel precisely regulates the motion of chisels arranged upon a cutting wheel acting upon the rough block, so that as the friction wheel successively traverses every portion of the rotating pattern, the cutting wheel pares off the superabundant wood from end to end of the block, leaving a precise resemblance of the model. This remarkable machine, with modifications and improvements, is in use in the national armories as well as in England, and in various forms is applied to many operations in making musket stocks, such as cutting in the cavity for the lock, barrel, ramrod, butt plates and mountings; comprising, with the turning of the stock and barrel, no less than thirteen different machines. Besides gun stocks, it is also applied to a great variety of objects, such as busts, shoe lasts, handles, spikes, etc., etc.

Mr. Blanchard received no less than twenty-four patents, including one for bending ship timber, but we believe that even up to the time of his decease, a year or two since, at an advanced age, he had not realized any considerable or adequate reward for his valuable inventions.